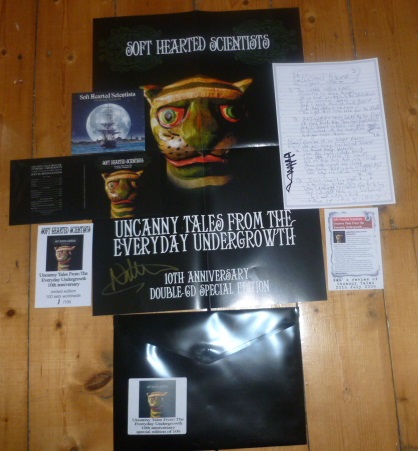 The debut album from Welsh Psych-Folk-Prog alchemists Soft Hearted Scientists started life as three EPs released in 2004 – Wendigo, Bethesda, and Midnight Mutinies, which were then collected the following year into the dozen songs that comprise Uncanny Tales From The Everyday Undergrowth. To celebrate the 10th anniversary of this long out of print gem it has been reissued as a 2-CD set, with one being the original album and the second consisting of home recordings of the songs.

The album is a Psychedelically pastoral set of songs. We open with the song that has become one of my favorites in the entire Soft Hearted Scientists catalog – Mount Palomar. It’s acoustic driven, but with a full band backing, including rhythm section, organ and freaky electronics. And when the chorus kicks in it’s like an acoustic-orchestral explosion with a joyously uplifting feel that borders on the spiritual. Its part 60s Pop-Folk-Psych, with beautiful harmonies, dashes of Progressive Rock, and wee bits of playful experimentalism. This acoustic led, yet full band sound, utilizing various instruments and sounds characterizes much of the album. The melodies, instrumentation and arrangements will hook you on the first spin, but there’s so much going on that attentive listeners will be rewarded on multiple listens.

Along with the enchanting music, Nathan Hall’s lyrics are crucial to what Soft Hearted Scientists are about. Topics can range from bucolic, to thoughtful, to wildly surreal, and just pure fun. Diving Bell is a musing toe-tapper that includes a spoken word segment describing a dream, part of which is about Billy Ray Cyrus sitting in Satan’s waiting room and being forced to play Achy Breaky Heart surrounded by demons with flaming mullets. Demons appear again in the form of the Wendigo. I love the combination of guitar melody that sounds like a Morricone soundtrack, oddball warbling synths, and multi-part vocals. I like the strange but seductive ooh-wee-ooh synths and acoustic guitars on Brother Sister. The Yongy Bongy Bo is another highlight of the set, with its blend of Pagan-Folk and Celtic, and the lyrics based on a poem by Edward Lear. Isabella (Keep Riding The Road To The Sea) is another standout, sounding like a Folk-Prog take on a gypsy influenced show tune. But then halfway through the song the band shift gears and settle into that mixture of rhythmic toe tapping, traditional pub gathering and Pop-Folk-Psych that Soft Hearted Scientists are so adept at. Dig that banjo. And Midnight Mutinies is a stunning blend of Folk-Prog and spacey freakiness.

The home recordings CD is fun for seasoned fans to get a feel for how the songs evolved into their finished form. Mount Palomar allows one to imagine how it might sound if performed by the more stripped down version of the band that plays concerts. The home version of Wendigo is close to fully formed but doesn’t yet have lyrics. The mystical feel of The Yongy Bongy Bo is already present, though in lo-fi living room mode. And on we go. It was fun listening to the songs side by side.

Note that the set comes in two flavors: The “regular” set on the Hip Replacement label, which consists of the original album plus a second CD with home demos of the same songs. There is also a limited to 100 copies special edition which in addition to the 2-CD set comes with a signed copy of the Midnight Mutinies EP, signed A2 poster for Uncanny Tales, 2 postcards, plastic A4 wallet with Uncanny Tales sticker, and signed lyric sheet for Mount Palomar. AND the promo sheet notes that the next new Soft Hearted Scientists album is on the horizon, to be titled Golden Omens. Can’t wait!

For more information and to order either edition of the CD visit the Soft Hearted Scientists web site at: http://www.softheartedscientists.com