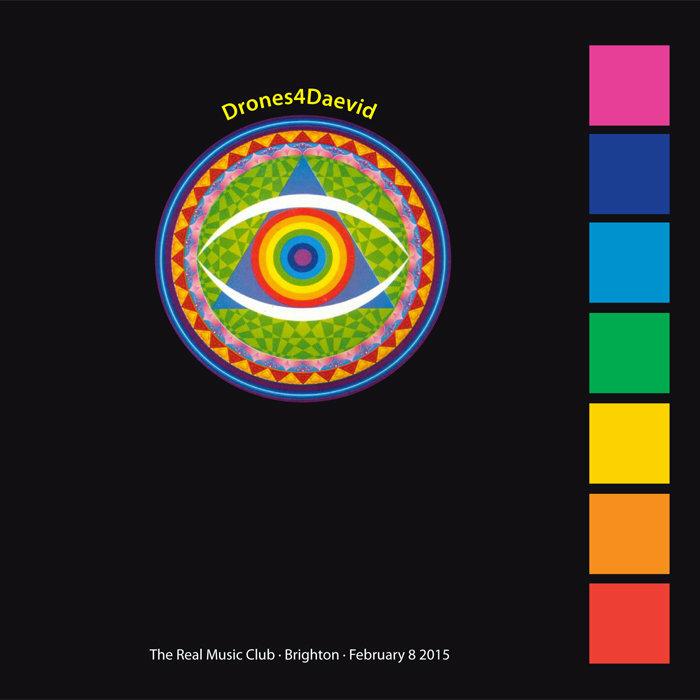 Quoting from the back of the CD: “The Drones4Daevid gig was organized by the Real Music Club as a benefit gig for Daevid Allen, to help with his medical recuperation costs after he had been treated for cancer. Very sadly, a week before the gig, Daevid announced that the cancer had returned and that he was going to decline further treatment, and bow out with dignity. The gig became a celebration of Daevid’s life and works, and a big thank you to Daevid with fans and performers travelling far and wide to be at this gig”.

Drones4Daevid took place on February 8, 2015 and of course we lost Daevid the following month. We’ve got an array of performers, much of it with collective lineups, performing Daevid’s compositions and other music.

The seven musician Invisible Opera Company Of Tibet open the festivities with the Space-Pop rocking Mysteries, which has killer melodic hooks and a ripping tripped out guitar solo. The Opera Company returns again with the Space-Prog rocker Circle Around, which is powerfully Gong spirited and includes some nifty hypnotic segments. The Opera Company later go into full blown Gong mode for a rousing version of the classic You Can’t Kill Me. It’s a monster performance and extra kudos to Jackie Juno for channeling Gilli on this one. Equally potent is the heavy rocking Reign Of The Dragon.

Monty Oxymoron and Friends weigh in with a deep space, mystically throb grooving take on Daevid’s Non God Will Not Go On Or The Wrong Way To Be Right. They also crank out a very cool soulfully Psychedelic rendition of Soft Machine’s We Did It Again. And Monty steps up to the mic for a couple of solo spoken word poems.

With a duo lineup of piano and violin, Mark Robson brings a tear to the eye with his lovely cover of Daevid’s Garden Song. Mark is a VERY impressive vocalist. He gets plenty of room to stretch out on the 14 minute Blame The Rich, which starts off as a song and then becomes a poster child for this set’s Drones4Daevid title with an OM chant charged violin, didge, gliss guitar and piano excursion which is variously hypnotic, Space-Prog-Jazz exploratory and at one point has a traditional Celtic vibe, which is especially cool with the didge droning along. Absolutely freakin’ fantastic!

Shankara Andy Bole on guitar, bazouki, gliss guitar and ebow serves up 23 minutes of Eastern/Indian inflected space/drone/gliss exploration. Andy is later joined by Elliet Mackrell, whose violin graced Mark Robson’s songs, for what briefly sounds like the Fiddler On The Roof soundtrack performed for a group of yogis and snake charmers before spinning off into an intense combination of Psychedelic and concert hall jamming swirl. We’re treated to another lengthy workout by The Glissando Guitar Orchestra which features the lineup of Brian Abbott, Andy Bole, Dani Speakman (Timelords, Psychik Atters), Kev Hagan (Nukli), Mark Huxley (Nukli), Bob Hedger, and Gregg McKella (Paradise 9), and conducted by Jackie Juno. Wow, Glissando + Orchestra = 20 minutes of mind-bending, whirly, swirly, droney stoney space exploration. And, finally, the festivities close with a heartfelt poem-tribute to Daevid by Arthur Brown.

In summary, this is one hell of a set, with lots of variety and fantastic musicianship and spirited performances from all. HIGHLY recommended.

The 2-CD set is available in an edition of only 200. Order the CD or stream and purchase the download at: http://realmusicclub-brighton.bandcamp.com
NOTE that all proceeds will go to the Daevid Allen Foundation Trust.