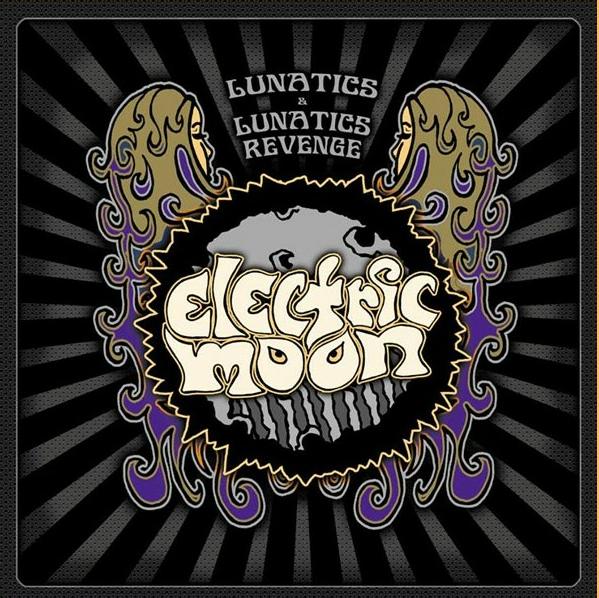 To say that German space explorers Electric Moon have been prolific would be an understatement, having released a steady stream of LPs, CDs and live CDRs since their inception in 2010. Their debut album was originally released as two separate vinyl LPs on Nasoni Records in 2010 and 2011, and now Sulatron Records has reissued the two in double CD and LP editions, with the LP being limited to 500 copies.

The Lunatics set consists of two lengthy jams sandwiching one shorter song. Brain Eaters features 19 minutes of mind-melting spaced out freeform Psychedelic jamming, with fuzzed and wah’d trip guitar soloing in acid drenched space as the drums flail and the bass lays down a head throbbing groove. Songs are uncharacteristic for Electric Moon, but Hotel Hell is a dreamy Psychedelic tune with a dark Gothic flavor, colored by eerie organ and Komet Lulu doing her best Renate Knaup on vocals. Wrapping up the Lunatics set is the 23 minute Moon Love. It starts off slow and cosmically dreamy with a Careful With That Axe, Eugene vibe. We’ve got a sauntering rhythmic pulse, soundscape and quietly rumbling guitar licks, and ghostly space whispers from Lulu. Then around the 10 minute mark the pace picks up as the guitar cranks out dirty stoned chords, the rhythm section gets more intense, and the space whispers get downright menacing. When the explosion comes we’re rockin’ hard. I love the combination of searing acid-space guitar, cool looped sounding solos and deluge of effects, as it blazes along with the crashing drums and grooving bass. Monstrous!

Lunatics Revenge opens with Gefahrliche Planetengirls, which lays down a stoned dance groove and 60s organ that conjures up images of sleek, tiger adorned hippie chicks hip shakin’ in the Beat Club. But this is no mere retro sound. Between the wildly soloing guitar, organ and overall dark but grooving atmosphere it’s an interesting combination of 60s Psychedelia and contemporary Stoner-Psych with a dash of Ozric Tentacles thrown in for good measure. Lunatic is a cool grooving freeform spaced out Psychedelic excursion with lots of emotional twists and turns as the pace and intensity level rises and falls. At nearly 18 minutes, D-Tune is the lengthiest track of the Lunatics Revenge set. Right out of the chute the band lay down a steamrolling Sabbath-in-space Stoner vibe, with killer guitar that burns a corrosive trail as it peels skin off flesh and paint off the walls. The potency of the music gradually climbs to Psychedelically feverish heights, and I love how Lulu’s efx’d chants magnify the sense of delirium. Stunning! Finally, the appropriately titled The Landing is a short trippy number that closes the set.

If you missed these albums the first time around (the Nasoni vinyl is sold out) then here’s your chance to get both gems as a twofer.