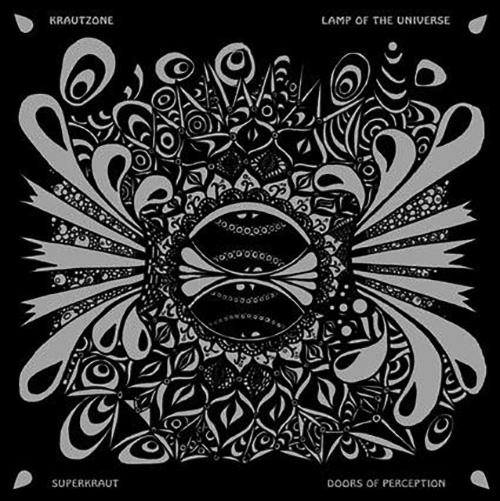 Krautzone are a collective of German musicians from various space/psych bands who get together for improvisational jamming. Members include Sula Bassana (Electric Moon, Zone Six) on synths, Komet Lulu (Electric Moon, Zone Six) on drums, Modulfix (Zone Six, The Spacelords) on synths, Rainer Neeff (The Pancakes, Zone Six) on guitar, and Onkel on bass. Their debut album – Kosmische Rituale – came out last year and they now follow that up with two 11 minute Superkraut I & II tracks that comprise the A side of this split LP. Superkraut I is like one big extended buildup, with thunderous drumming laying the foundation for swirling, droning organ, stinging fuzz guitar licks and jamming stoned guitar, and bubbling synth effects. A freeform spaced out Stoner-Psych jam that feels like it’s working toward an explosion. I thought Superkraut II might be that explosion but instead it starts fresh, being a hauntingly trippy whirlpool of steady percussion, synth lines that are both hypnotic and disturbingly phased, eerie soundscapes, atmospheric guitar licks, spaced out slide guitar, and alien electronics. The opening track was a cool jam but this one has much more going on emotionally and in terms of thematic development.

Lamp Of The Universe is the solo project of New Zealand based musician Craig Williamson, who has also been in the heavy rock bands Datura and Arc Of Ascent. Craig’s entry is the 22 minute Doors of Perception, which is described as “a journey through the psychedelic landscape in 3 parts”. It starts off like a cross between early Tangerine Dream and the intro to Pink Floyd’s Wish You Were Here, but it’s far freakier, featuring intense minimal soundscapes, a spacey, mesmerizing melody, and a shower of electronic effects. Near the 8 minute mark the music transitions to a more traditional Lamp Of The Universe style, consisting of a dreamily shamanic Psychedelic concoction of acoustic guitar, sitar, pied piper synth melodies, and Craig’s lulling vocals. After a while the mood gets increasingly intense, with slow but ominous drumming and threatening acid guitar. And here it remains, marching moodily yet beautifully across a cosmic panorama toward the finale.

An excellent pairing of bands for this split LP. Note that the album is limited to 300 black vinyl and 200 silver/black marbled vinyl.