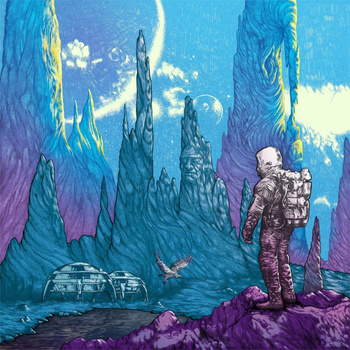 Swedish space rockers Yuri Gagarin released their self-titled debut last year and a vinyl edition put out by a local label quickly sold out. Dissatisfied with the mix, the band had the music cleaned up and reissued on their Bandcamp site, and now Sulatron records has made a new LP edition available on 180 gram clear/blue marbled vinyl limited to 500 copies.

Regarding the new mix, I can tell you that it is much crisper. The instruments stand out better individually compared to the relative muddiness of the original. Having said that, I’ll let my comments from the previous review speak for me:

First Orbit is a blistering stoner-metal space rocker with Blanga-like repetitive riffage and basic but catchy melodies. The sonic assault guitars blaze away while the space synths soar, rising and falling, bubbling and splashing as they weave their cosmic arc. An instrumental version of Litmus without the Prog elements would be a good analogy. Sonic Invasion 2910 continues down a similar path, in this case bringing to mind a more metallic version of Farflung. Za Kosmosom lays down a steadily stoned space-metal foundation over which the guitar leads the way in hypnotic om chant fashion, which sounds great along with the wah’d liquid psychedelic leads. As hard and heavy as this tune is, the music has a mesmerizing quality, being simultaneously punishing and trance-inducing. Finally, The Big Rip is the most rock ‘n’ rolling track of the set, being a Hawkwind in a heavy metal wrapper, intergalactic battle for a free universe space rock anthem.

The album may be under 40 minutes long, but Yuri Gagarin have pulled out the big guns, with a set that will leave you stunned, shaken, and begging for more. For fans of Litmus, Farflung, First Band From Outer Space, and Stone Oak Cosmonaut. Vinyl junkies – check out the cover art.

To order the vinyl LP visit the Sulatron Records web site at: http://www.sulatron.com
Stream and download at the Yuri Gagarin Bandcamp site at: http://yurigagarinswe.bandcamp.com