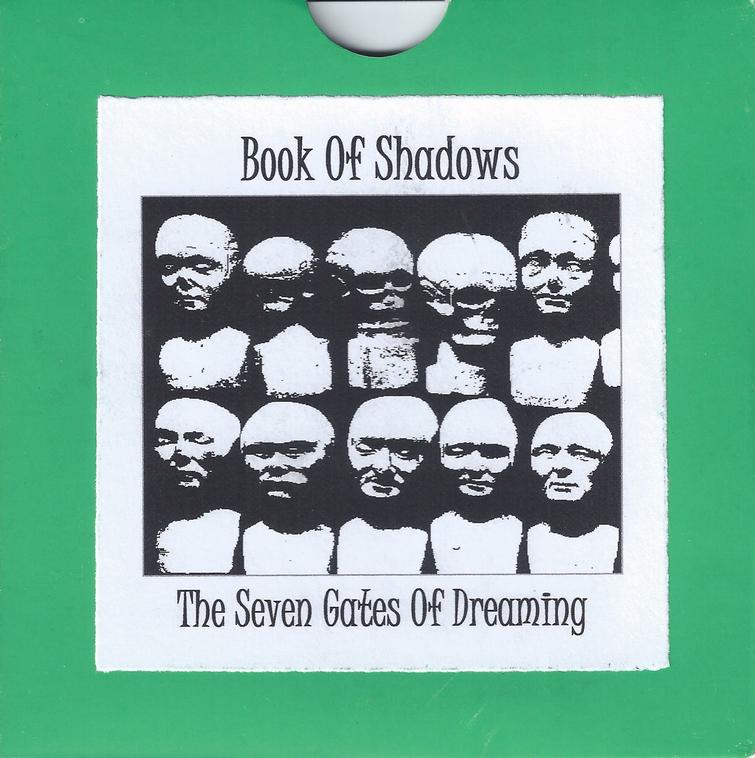 The latest from Austin, Texas based Book of Shadows is another of those small batch Reverb Worship label CDs that comes in a super limited edition of only 50 numbered copies. As usual we have a fluid lineup from one track to the next, with four improv tracks and two Aaron Bennack compositions.

The Dark Sea Of Awareness is a 17 minute improv with the core trio of Sharon Crutcher on vocals, Carlton Crutcher on keys, and Aaron Bennack on guitar, plus Ernestina Evelyn Forbis on vocals and Chris Cones on guitar and electronics. This is seriously dark and intense music, coming across like an Ambient-Industrial/Noise-Psych horror movie soundtrack. Sharon sounds like a morphing of Gilli Smyth and Jarboe while Ernestina provides haunting backing chants. Aaron and Chris’ guitars play off each other nicely, with each contributing to the macabre yet freaky narrative. Soundscapes create the atmosphere and electronic effects offset the mood with a hovering UFO presence, making for a contrasting horror/sci-fi vibe. A strong opener that’s simultaneously disturbing and beautiful.

Stopping The World is a shorter track written by Aaron and featuring just Aaron, Sharon and Carlton. The music is a sparse but effective combination of varied melodic guitar patterns and spaced out alien electronics, plus Sharon’s eerily mesmerizing vocals. The guitar, electronics and vocals taken individually are so different, and yet come together to create a cohesive and hauntingly beautiful whole. North Door is another Aaron penned track with the same trio plus Brett Humphrey on guitar and electronics, and consists of moody space atmospherics and electronic effects, noisy Psych guitars and Sharon’s vocals.

The Principles Of Stalking is a nearly 30 minute improv by the quartet of Sharon, Carlton, Brett Humphrey on guitar and electronics and Steve Marsh on guitar, electronics and vibrator. Once again Book of Shadows tread a strangely alluring middle ground between horror, sci-fi and Psychedelia on this noise-laden and often hair-raising exploration of sound, mood, and theatrical narrative sculpture. I really like the sections with densely noisy yet atmospheric Psych guitars and Sharon banshee howling amidst fluttering space electronics. Another of those strange but cool combinations of contrasting elements that Book of Shadows excel at bringing together. Glide Into Eternity is pure Space-Ambience and sound exploration and one of the shortest tracks I’ve ever heard from Book of Shadows. Finally, The Doors Of Not-Doing is a Sharon/Carlton/Aaron improv that’s quite different from the rest of the album. Part of it gets into Indian influenced orchestral territory, but there’s also tribal dance electronica and much more. These folks are always full of surprises.