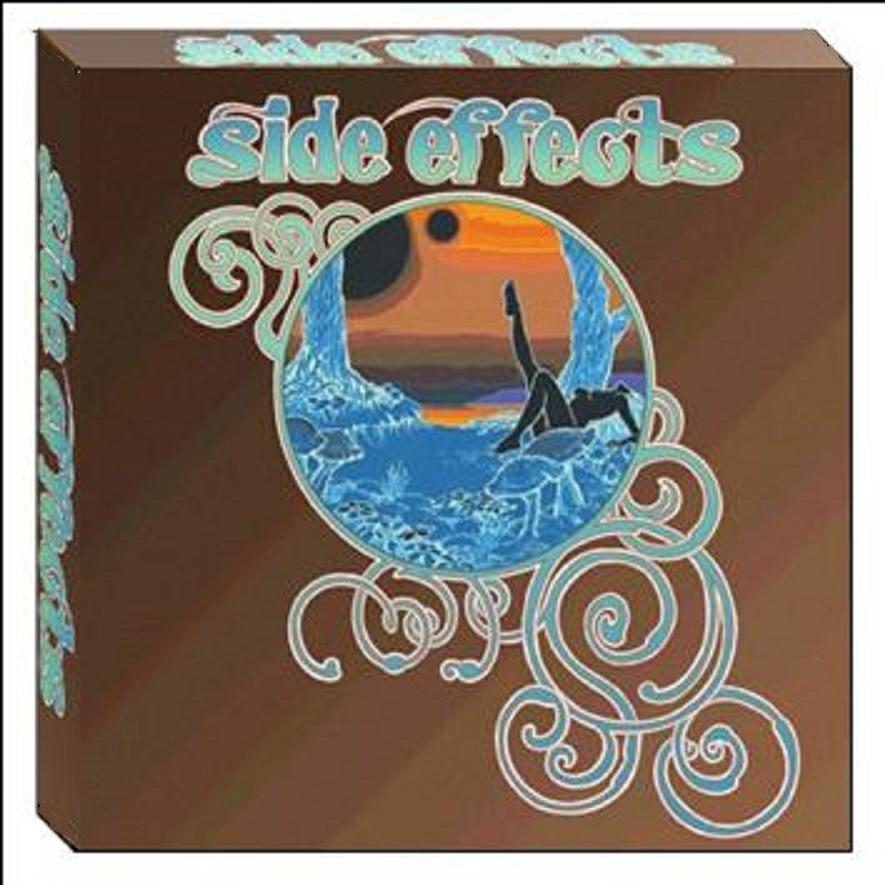 Fruits de Mer Records may specialize in contemporary bands covering 60s/70s Psych/Prog/Krautrock/Space Rock/Acid Folk music, but they are continually brimming with fun theme ideas. What we’ve got here is 4 LPs, 8 sides, and 8 bands, each taking a track, NOT necessarily long in its original form, and doing their own version that fills an entire LP side. Sound pretty cool? Well hold on to your hat and check this out…

There’s some pretty serious variety on the Side Effects box set. Things start off innocently enough with the The Soft Bombs covering Pink Floyd’s Echoes, already a side long epic, and though largely faithful to the Floyd they take it deeper into space and get far more acidic. Similarly, The Luck Of Eden Hall stick to the core spirit of Yes’ Starship Trooper, mostly during the vocal portions, though they surround the proceedings with an atmospheric aura and some ripping guitar solos that are more ass kicking Space Rock than Yes’ Prog virtuosity, and blast off into Psychedelic space for some stratospheric jamming that is a total Yes gone Space Rock fest.

Things get more interesting with Arcade Messiah’s 19 minute treatment of Four Horsemen, originally a 6 minute song on Aphrodite’s Child’s 1972 666 album. It starts off as a high intensity guitar bashing heavy rocker. Once the vocal section kicks in the music continues rocking but goes into Psychedelic space and then gradually begins to mesh the trippy groove with more in-yer-face aggressive but atmospheric guitar rock while also incorporating both Prog-Psych and Metal elements. Lots of really cool and seamlessly flowing variety that takes the original into entirely new territory. The Bevis Frond’s cover of the Electric Sandwich song China was previously released on the 2012 Fruits de Mer Head Music compilation, though in considerably abbreviated 9 minute form. The wigged out Electric Sandwich original from 1972 is tailor made for the Frond and is stretched out to a 24 minute Nick Salomanized Psych guitar lovers wet dream, being a non-stop hard Psych rock jam with loads of awesomely delicious rocking and tripped out dual guitar soloing. Julie’s Haircut admirably tackle Miles Davis’ Shhh/Peaceful, starting off similar to Miles, then adding a touch of dreamy ambience and later a Soft Machine vibe, and then slipping off into an ambient soundscape excursion before laying down a cool Ambient-Jazz groove.

The song choices get downright surreal starting with Wreaths’ drugged and dreamy Acid-Folk-Drone take on the Gordon Lightfoot hit Sundown, creating a combination of Velvet Underground, Shoegaze and spacey, valium laced West Coast Psych. Superfjord put a Hawkwind and symphonic Space-Prog spin on their cover of The Byrds CTA-102. It’s Space Rock to be sure, with Prog influences and lots of bleepity blurpity electronic and robotic effects, and with an almost Kraftwerkian twist to what often sounds like Beach Boys vocals. It’s a highlight of the set and another where the band take a song and makes it entirely their own. Finally, Sendelica’s rendition of Donna Summer’s I Feel Love opens with a totally alien freaky soundscapes, effects and voice samples buildup. After several minutes the space synths start to whoosh and a dancey rocking beat kicks in, sounding like a Gong and Ship of Fools collaboration. The sax plays the classic melody but jams too and eventually locks into a You-era Gong gone cosmic disco feel.

DAMN, that is one hell of a batch of covers, both in choices and interpretations. To a large extent it’s all new music with the fact that these are cover songs being a mere launching point.

Note that the box set will be available late August and includes a 60cm square fold-out poster and sleeve and label designs by The Luck Of Eden Hall’s Gregory Curvey.