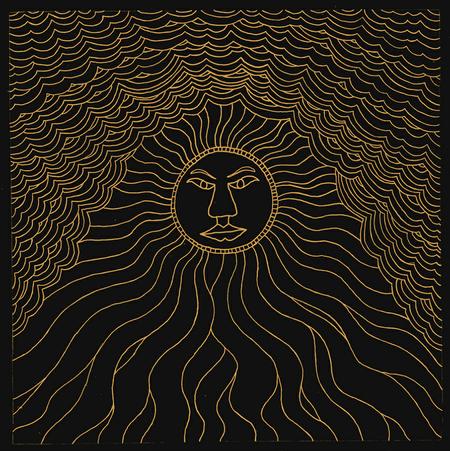 Kikagaku Moyo, which is Japanese for “geometric patterns”, is a Tokyo based quintet who formed in 2012 with the intent of recreating the spirit of the early 70s Japanese Psychedelic underground. Their first self-titled album was released as a download in May 2013, and I reviewed it earlier this year when it was reissued on LP by Cosmic Eye and Sound Effect Records. CLICK HERE to read my review.

That LP and the next Kikagaku Moyo album – Mammatus Clouds – now have vinyl releases in the U.S. through Captcha Records. The first album consisted of tracks in the 4-7 minute range and a combination of trippy and heavy acid rocking music. With the exception of one short song that combines Acid Rock with a Hawkwind styled Blanga drive, Mammatus Clouds is dominated by two lengthy tracks, the first stretching out to 28 minutes and the second at nearly 17 minutes.

Adorn yourself with your most flowing robes, fire up the hookah and rev up your magic carpet because the epic Pond explores the trippiest regions of Psychedelia. You’ll want your space helmet too because this sucker stretches right out into the cosmos. Sitar, heavily efx’d guitar, droning soundscapes, chants and rumbling percussion trip along and gradually build in volume, tension and Psychedelic potency, like a meeting of early Amon Düül II and The Spacious Mind outside the Taj Mahal. Things get mightily explosive as the music reaches feverish pitches of spaced out and acidicly corrosive frenzy, only to recede into a dreamy yet equilibrium challenged space excursion with soloing sitar and guitar.

Never Know maintains the Indian theme but is more melodically song-like, with sitar and what sounds like a play on The Beatles He Said She Said. There’s also a Psychedelic use of dissonance and off-kilter rhythm that recalls The Velvet Underground at their most experimental and adds a welcome sense of lysergic disorientation. It all eventually develops into a beautifully mesmerizing symphony of sitars that seem to drone away melodically in some floating nether region between angelic heaven and cosmic space. And damned if it doesn’t sound like the underlying chant vocals are actually singing He Said She Said! File under ultra freaky and mucho deep space Psychedelic.

To stream, download and order both LPs, as well as many other excellent Captcha Records releases visit: https://captcharecords.bandcamp.com